Enables server rules enforcement. Provides the ability to restrict certain player actions, until they accept the set of server rules.

This module enables sever owner to enable and enforce set of Server Rules. Certain actions of the players can be restricted, until they have accepted the Server ruleset.

As any module of NidToolbox set, it requires nid-core version 1.0.1+ module, available here

Config files are located at Mods\NidToolbox\Configs\

Rules.txt - stores text for the Rules popup. Supports standard Eco's formatting tags .i.e <b> <u> <color> or even icons.

RulesConfirmMessage.txt - stores the text for the Confirmation Button (see below) that displays the final conformation message to the player, prior for them accepting the rules. The lookout of this button can be tested via /rules-showbutton command. Button text also supports standard Eco's formatting tags .i.e <b> <u> <color> or even icons.

All config files are created upon first start of the plugin.

See below for examples.

RulesEnabled sets the module enabled or disabled, can be set in game via /rules-enable command.

InformEveryone toggles the message to be sent to everyone on the server, when someone accepts the rules.

PreventClaiming prevents claiming action until player accepted server rules, can be toggled in game via
/rules-prevent claiming with bool true or false.

PreventChopping prevents tree chopping action until player accepted server rules, can be toggled in game via /rules-prevent chopping with bool true or false.

PreventLittering prevents dropping trash action until player accepted server rules, can be toggled in game via /rules-prevent littering with bool true or false.

PasswordEnabled sets password requirement to true or false, can be toggled in game via /rules-requirepass with bool true or false.

See below for the list of all available commands in this module with their example usage.

This configuration file, affects this button in game: (click to see the image) 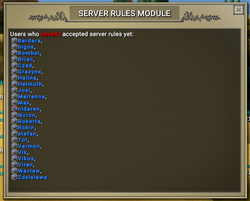 Displays information about all commands contained within this module.

Sets the whole module to enabled or disabled state

Prevents set action from being used by player until they accept the rules. Accepts the following options as actionName claiming chopping littering mining

Displays the set of players who have not accepted the server ruleset yet.

Shows the current configuration of the module

Shows confirmation button to test how it looks. Clicking yes or no has no effect, as this is just a test.

Would you consider supporting NID as he brings you more content and continuesly updates his modkit?

Module has been made compatible with Eco 9.2, due to Auth provider service changing in that version of the game.